Anime I plan to watch!

The setting is a parallel world to Fate/stay night where the Greater Grail mysteriously disappeared from Fuyuki after the Third Holy Grail War. After many years of silence, around the same time as the Fifth Holy Grail War would have happened, the Yggdmillennia, a family of magi, openly declares their secession from the Mage’s Association, and that they are in possession of the Grail. The Association dispatches fifty magi to retrieve it, and all but one are instantly slaughtered by a mysterious Servant. The one remaining manages to activate the reserve system of the Greater Grail, allowing for the summoning of fourteen Servants in total.

In the city of Trifas, two factions will fight for the control of the sacred relic, each of them possessing their own team of seven Servants : the Black Faction whose members are part of Yggdmillennia, protecting the Grail, and the Red Faction whose members were sent by the Mage’s Association, trying to take the Grail back. For an event of this scale, the Grail itself summons its own Servant, the holy Ruler, to oversee the conflict.

This marks the start of the Great Holy Grail War. Summary from My Anime List. 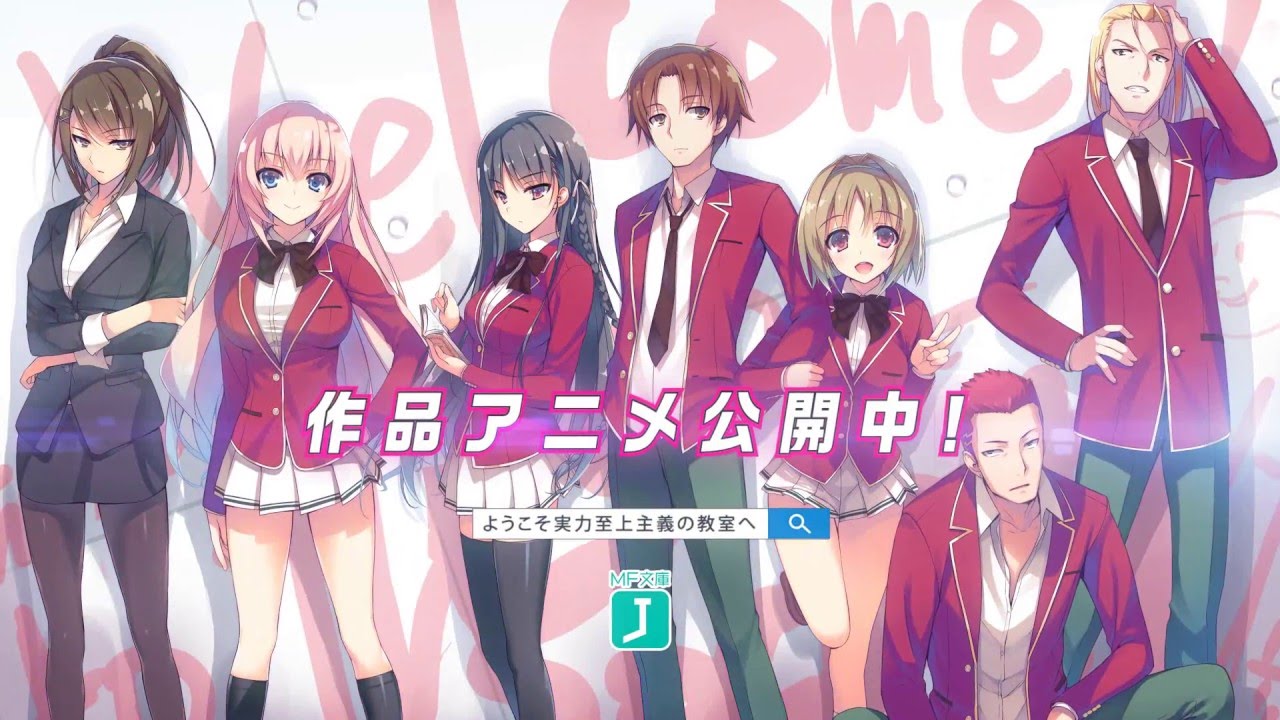 Koudo Ikusei Senior High School is a leading prestigious school with state-of-the-art facilities where nearly 100% of students go on to university or find employment. The students there have the freedom to wear any hairstyle and bring any personal effects they desire. Koudo Ikusei is a paradise-like school, but the truth is that only the most superior of students receive favorable treatment.

Ayanokouji Kiyotaka is a student of D-class, which is where the school dumps its “inferior” students in order to ridicule them. For a certain reason, Kiyotaka was careless on his entrance examination, and was put in D-class. After meeting Horikita Suzune and Kushida Kikyou, two other students in his class, Kiyotaka’s situation begins to change. Summary from My Anime List.

Inaba Yuushi’s parents died in his first year of middle school, and he moved in with his relatives. Though they did care for him, he could tell he was a burden. After he graduated, he happily prepared to move to a high school with a dormitory. Unfortunately, the dormitory burned to the ground before he could move in! Yuushi doesn’t want to live with his grudging relatives, but it’s rough finding lodging as an orphaned student with little money. He finally finds a room in a nice old building which seems too good to be true.

The catch is that it is a Monster House, a place where humans and supernatural creatures—ghosts, mononoke, etc.—live together. Another high schooler lives there, a cute girl named Akine, and she’s completely unfazed by the monsters. In fact, she can even exorcise evil spirits! Yuushi’s high school life just got much stranger than he ever bargained for. Summary from My Anime List.