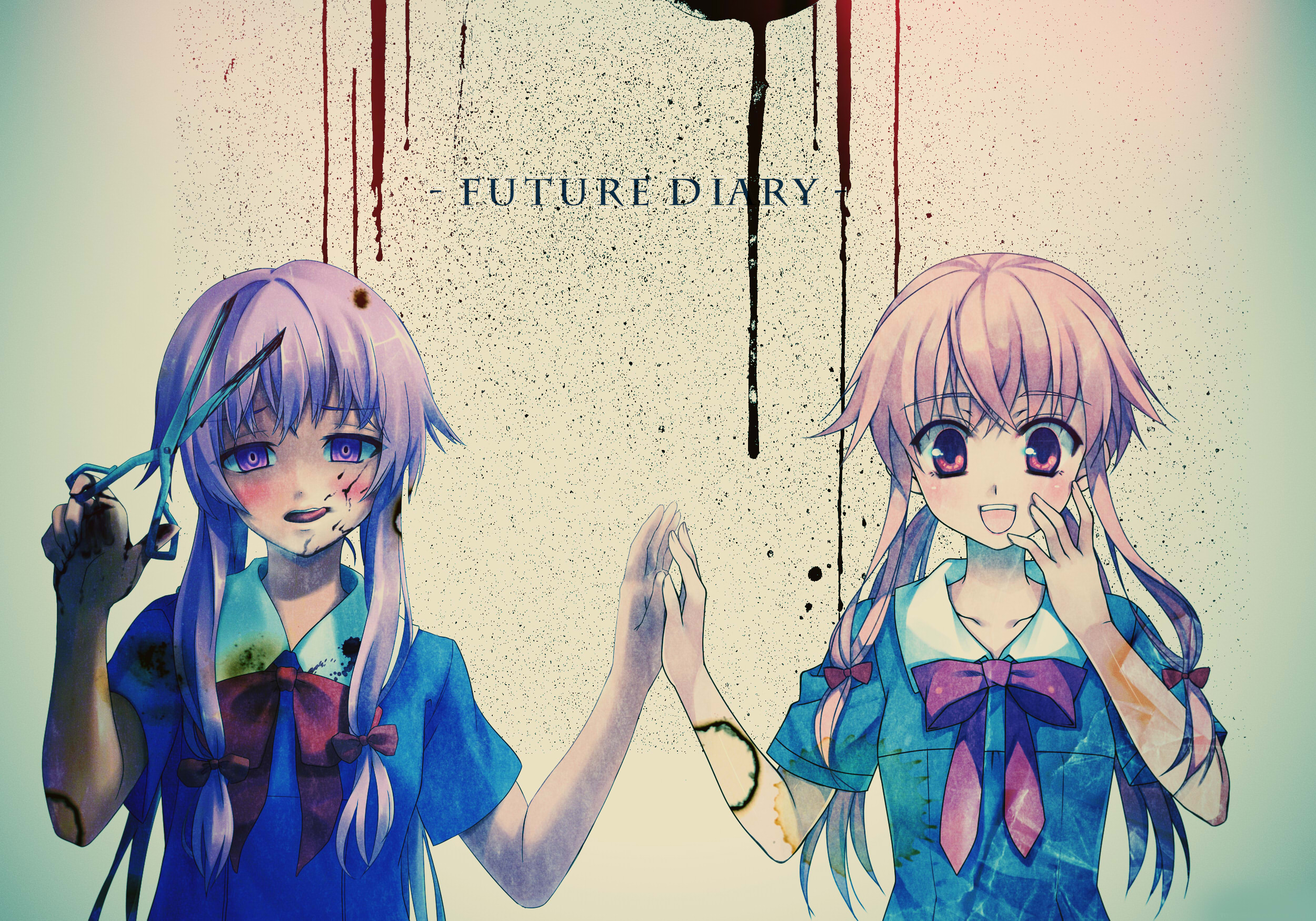 What would you do with an object that told you the future? If you already knew exactly what was going to happen tomorrow, or had the answers to that one test you need to pass? What you would you do if this object told you, you were going to die?

Mirai Nikki or Future Diary is quite the psychological anime. Mirai Nikki is a brilliant combination of a psychological thriller, romance, action, supernatural, and suspense. Mirai Nikki tells the tale of two middle school students, their love for each other, and their roles in a bloody survival game to become a God of Time and Space.

Yukiteru Amano is a middle school boy gains the ability to see the future through his diary. I’m not going to lie that is an awesome ability. Or so it seems that way at first until he discovers that 11 other people with diaries and his ability. These 11 people are now his competitors in a survival game as well as a competition to become a God. But it’s not all as bad as it might seem because of a protector. Gasai Yuno, a cute shy naive girl who goes to the same middle school as Yukiteru. It turns out that not only does she have a diary, she also has a little crush on Yukiteru. What she may have forgotten to mention is that she is a psychopath, insane and a stalker. Put that all together and you get an insane psychopathic stalker also known as Yandere. The anime shows the story of these two as they try to stay alive in the killing game they have been placed in.

Personally, I feel like Mirai Nikki at its heart is a romance although it might not seem like it because it is so much more than that. Mirai Nikki not only shows but explores how good people can indeed go insane, or do horrible things and commit terrible crimes because of traumatic experiences. It also shows how someone’s willpower and actions can modify the future. The pace of the anime is quite fast but it does not feel rushed or forced. I kid you not even when there are no intense scenes going on the suspense will get to you. You might already know but I do like psychological anime I just don’t watch a lot of them because I can’t always handle it. Watching this amine wrecked havoc on my emotions but the anime was fantastic in terms of a psychological thriller. Mirai Nikki is rated R and for good reason. This anime deals with some very mature subjects like rape, gruesome murders of children, fan service which I will talk about more later, sex scenes, and a lot of blood. Seriously there is a lot of blood is this anime.

The anime though does many things right throughout the series. The anime has a very strong female lead by the name of Yuno Gasai. Now she is quite the character while she may appear shy and naive there is a lot more to her than meets the eye. She hides many dark secrets and goes from shy to psychopathic killer so fast. Which is interesting to see because the anime likes to jump back and forth between sweet and innocent Yuno to deadly, calculated, cold-blooded killer Yuno. Which can be quite shocking to see more so because the initial image we have of Yuno is shy, sweet, and innocent. I have to admit the juxtaposition in this anime is amazing and is really cool to watch. This anime never had a slow or dull moment that’s for sure.

The story line and the plot of the anime are not that hard to grasp. Because within the first few episodes well the first episode really every little detail of the murderous game is shown. 12 players, different in age, all holding different statuses in their society, and different in gender all with the same goal. To be the last one standing, to become the God of Time and Space. The owners of the diaries stay a mystery until they wish to reveal themselves. They can form alliances, and back stab their partner or partners at the same time. Coming up with plans and strategies to kill and survive are a must in this anime.

Mirai Nikki does have character development in it but I will admit that not all of the character development is done in a way that makes sense. In the first episode, the main characters of the anime are presented to us. Yukiteru the cowardly, naive, and lone wolf middle school boy. Yukiteru has a very negative view of himself as he sees himself as a failure which causes him to depend on others to save and protect him. Then there is Yuno the twisted, psychopathic, insane, murderous middle school girl. She is definitely not afraid to do whatever it takes to protect the boy she loves more than life its self. I just wish the other characters in the anime had more character development because most of them just look like psychotic killers.

Okay now on to what I said I would talk about later. The fan service, I am not really a fan of the fanservice in this anime because it seems so out of place sometimes. Not to mention that some of the characters in this anime are like 14 maybe 15-year-old girls. Which really adds to the disturbing feeling you get from the anime especially since they added in a sex scene. I do not want to spoil the anime for the people who will watch it but just know that it’s not all sunshine and rainbows. There is rape, talk of rape, and other not so pleasant things.

Overall the anime was very good. I would recommend it to people who don’t mind really bloody anime and mature themes.