Oh my goodness. The first time I saw Lee my first thought I immediately was like what’s with the eyebrows? But then I saw his suit and had no words. Okay I mean he is the only one apart from Gai sensei that can make that suit look good. But you know after I watched a little more and got used to his eyebrows. I came to like them and Lee. I thought it was really funny actually when he decided to challenge Sasuke. Because he seemed so serious, tough, and just had an air of can’t touch this going on. But in reality Lee is a kind, caring, sensitive in a way, brave, determined, dedicated guy. Who doesn’t mind coming to the rescue of one of his friends. Who just like anyone else has the desire to get stronger, better, faster, so he can be the best ninja that he can be. I mean that hasn’t been easy for him especially when he fought Gaara. His injuries were so serious no one thought he would be able to go back to the way he was. But Lee being the guy that he is and the fact that he takes after Gai sensei. Refused to give up. Which is what makes him awesome that and the fact that he seems to have no limit when it comes to spicy food. I also love that when’s he’s drunk he some how gets stronger.

I love Shikamaru I love that he’s this lazy, I don’t like to do things, extremely smart, kind of guy. I also think his shadow possession jutsu is wicked cool.  I mean seriously shadow possessions. But aside from his wicked cool ability I love how smart he is. His IQ is way higher then most peoples which not only makes him a threat but a triple threat. To be exact anyway. He doesn’t really like to get involved but knows when to stay out of things and when to jump in with two feet. He seems to be the voice of reason for most and the strategy making guy for complex missions. Is there anything he can’t do. Probably but I still like him.  He’s wicked smart as we’ve seen but seems to hate all the responsibilities that being smart comes with. But he deals with it to help his teammates and to prove himself. But he also gets away with so much well he did when he was little anyway always spending his days sleeping, watching the clouds, or by playing  shōgi and Go. Yes he’s lazy but he’s also quite helpful and very smart. What’s not to love? 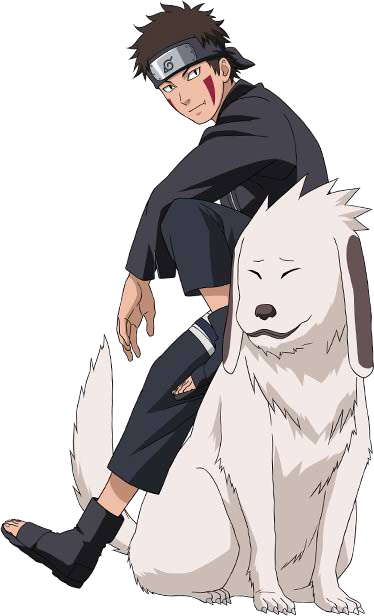 I really like Kiba he’s awesome. I love that he’s got this animal side which enables him to understand Akamaru. He’s strong, fast, has a very good sense of smell which as we all know it’s always a good thing. He’s very headstrong and may seem a little egoistic ande gruff sometimes. Kiba is loyal and will protect his friends with his life along with Akamaru who is adorable might I just say. I love how Kiba is able to pick up on things others can’t. Like Hinata’s crush on Naruto. He was one of the first people to notice. He would go around telling her where Naruto was and teasing her a little. Kiba just always seemed to know what was up even when others didn’t. I like that about him.